Well, I must admit, this is proper exciting this!  This is our first E Newsletter, so congradulations must be in order!

We used to mail out regular newsletters for many years, letting you know what's going on inside Aquarius as well as any other relevant vibrational essence news, but things have being moving into electronic format and at last its happened to us too.

The Making of Lunar Sweet Pea

This article documents the process of discovering the Lunar Sweet Pea remedy, the latest of our flower remedies made under moonlight, for past life healing.  Lunar Sweet Pea is for souls who, in a previous life, have been buried alive or died through suffocation. 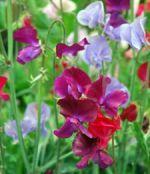 In October I was contacted by a woman seeking a past life remedy for her husband. He had had treatment for a physical condition but she felt that there was an underlying wound caused by suffocation when buried alive in a previous life and that one of my past life remedies made under moonlight would be beneficial. I told her I was sorry but I did not have a remedy for this specific karmic wound. However, the conversation stayed with me, something about her intensity and earnest desire to help her husband and my desire to help her. The search for a flower remedy for this karmic condition was on.

It became one of those questions that sits in the back of the mind waiting for an answer. A day or so later I became aware of a link between the karmic condition she described and sweet peas. At first it was no more than that, just an intuitive connection. However as I waited for the young moon to wax sufficiently to make the remedy Lunar Sweet Pea a fuller understanding of this intuitive hunch began to fall into place.

Sweet peas had been figuring prominently in our lives of late for it was Heidi's mum's favourite flower and Heidi, with her mum's death fast approaching had grown an impressive bank of Sweet Peas in the garden to take on her regular visits to the hospital.

Less than a month earlier, as we drove up onto Dartmoor so that Heidi could have a good stomp around to release some of her tensions and anxieties, she received the phone call from the hospital to tell her to come sooner rather than later, otherwise it might be too late. We were just getting out of the car at Haytor and I suggested we have a quick walk up to the rocks since we were here anyway.

It was a beautiful day for a walk, even a swift one, and the gorse was in full flower; dotted amongst the vast yellow swathes of flowers were clumps of purple heather. The sun was being filtered through swirling mists producing a soft and ever changing light. At the tor a piper was playing and I requested a lament. As the haunting notes drifted into the wilderness, disappearing into the great open spaces, it was all too beautiful and poignant.

Heidi kissed her mum's cheeks and let her tears fall onto her face. She spoke her last words to her, thanking her for all she had done. I think her mum could hear, it was difficult to tell, she was only 12 hours away from taking her last breath and heavily sedated on morphine. Heidi needed to leave the room to contact her brother and I stayed with her mum, holding her hand and stroking her head.

I looked on at this old woman, now little more than a skeleton, her teeth (something she had been so proud and vain about) falling out of her gums, her mouth open gasping for breath, her tongue all dried out and cracked open. Alone with her in the room I thought of taking one of the pillows from the foot of her bed and putting it over her face to lessen her last hours of suffering. She would not struggle but someone might come in and catch me in the act of murdering her. It was a horrible thought to have but later I was able to see how it fitted into the larger picture.

At the funeral director's Heidi requested he put a tissue in her mum's hand, like she always had and a selection of personal belongings in her favourite handbag to be placed in the coffin. One thing that was joked about but not included was a mobile phone because her mother had always been scared of being buried alive.

I like visiting her mum's grave, it is a beautiful spot overlooking the estuary of the river Teign . I sit on the ground next to the grave, pick up clumps of the red clay and crumble them in my hand. We will continue placing the sweet peas on her grave at each visit, until the autumn frosts kill them off.

Lunar Sweet Pea is for souls who in a previous life have been buried alive or have died through suffocation.

Healing the Past is our book on the Moon Flowers.  This is the description of Lunar Sweet Pea in the repertory section of the book.

Lunar Sweet Pea is for souls who in a previous life have been buried alive or have died through suffocation.

This past life death was traumatic and totally unexpected. It may well have left upon the soul a profound fear of something similar occurring again. For some souls this will affect their current life dramatically whilst for other souls carrying this wound they will be living with an apprehension of unknown cause, a fear that creates an underlying worry and tension in their life that never seems to be able to be understood or resolved.

Fear of the dark, being or descending underground, being in confined spaces, unable to leave a room (particularly one with no natural light) or a strong dislike of anything over the face may be present in this life. Souls carrying this wound may be shallow breathers and suffer in the lungs with shortness of breath, particularly when in a state of fear. Lack of fresh air may cause panic.

Lunar sweet Pea resonates strongly with Pluto in conjunction with one or more of the personal planets in the 8th. house. This remedy was made under a Saturn/Pluto mutual reception, so when the signs of Scorpio and Capricorn are closely interlinked within the natal horoscope, Sweet Pea may be an appropriate remedy to use.

Have you ever written and thanked the makers of Asprin?

I took a couple of your white pills and my headache was so much better in the morning.  I just wanted to thank you.

I bet not.  Mr Asprin makes those white pills everyday and the only reason he knows they are working is because he keeps on making them.  But no one thinks to let him know how much they have helped them, send him a 'thank you' card.  Poor Mr. Asprin.

Luckily we do receive feedback and thank you messages which we love to receive.  Thank you for taking the time to let us know.

I contacted you recently about a remedy for our pony, Midget.  You dowsed for him and made up a Personal Combination Remedy which is working brilliantly.  He has much more energy since I started giving him the remedy, it is fantastic and wonderful to see so thank you.

I recently had major heart surgery and your products have really helped me. Thank you.

Best wishes to everyone at the close of the year, and a big thank you to you all for your support throughout the year.